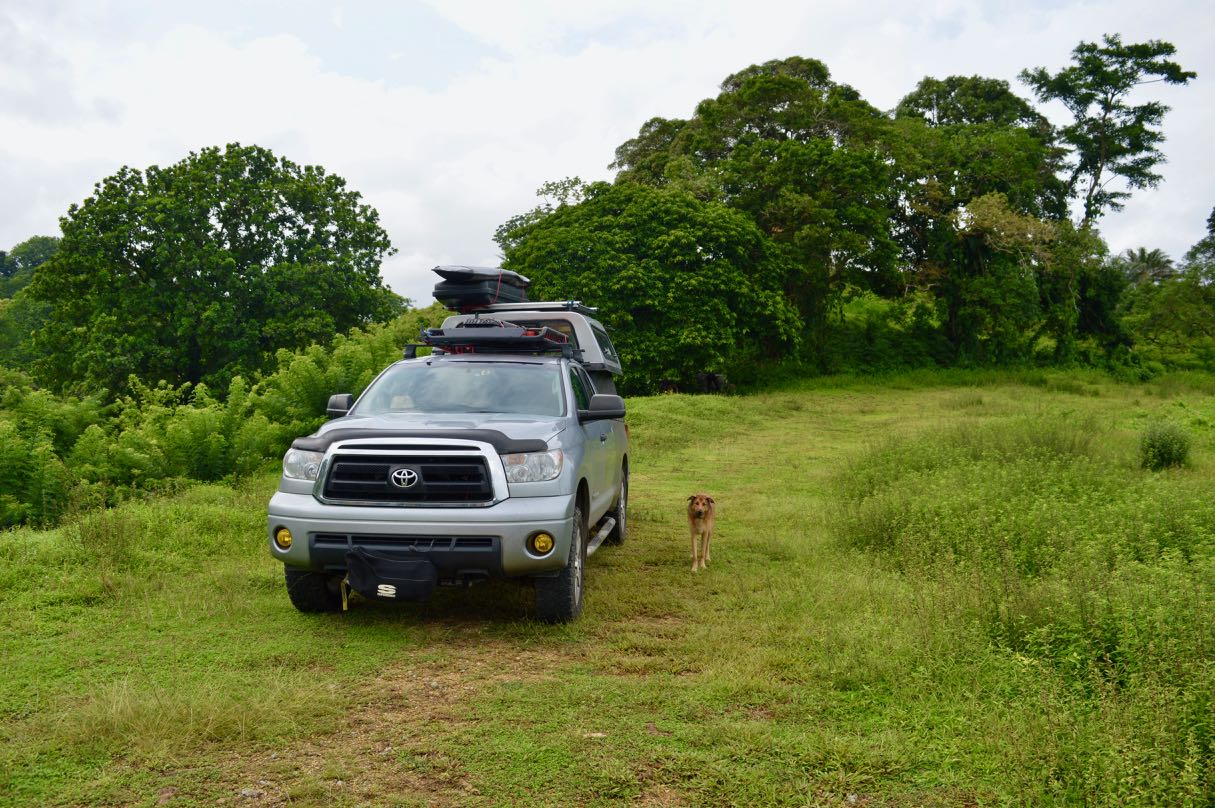 Our border crossing from Costa Rica to Panama went fairly smoothly aside from dealing with importing Roo. When entering Panama there is an import charge of $130 USD per dog! This is significantly more expensive than any other border. Apparently this fee is not charged at all border crossings (only at the main land border), so it makes you wonder how legit it is, also you are paying for “quarantine” and then just walk through the border. This charge makes sense when you are flying your dog into Panama, but not when you are driving through a loosely controlled land border. At one-point Mitchell was arguing with the border officials about this charge (not recommended…) and a stray dog walked across the border from Costa Rica into Panama. Mitchell decided to inquire as to why the officials did not stop that dog and charge it the $130 entry fee. This did not go over very well, and in the end,  we had to pay the $130 fee. We have met numerous other travellers who have done very interesting things to avoid paying this fee such as crossing the border at night when the “vet” isn’t working, hiding their dogs in the camper, and even releasing their dog to cross the border solo and meet them on the other side. Unfortunately, Roo is not stealthy enough to accomplish this as when the truck is moving she is convinced she must be inside it or she will end up being abandoned. While, we do not advocate avoiding border import rules (as in many cases they are there for a good reason), it is often frustrating when faced with inconsistency and processes that really don’t make sense,  evidently the only real purpose they appear to serve is generating cash.

Once we made it into Panama our first stop was Playa Las Laja’s. We ended up camping near the Las Laja’s Beach Cabins, which was an excellent place to stop. The beach here is remote enough that during the week you have almost everything to yourselves and there is even a decent beach break for surfing. Mitchell was feeling good about his Spanish skills as one of the employees at the beach cabins came by and used him as a translator to communicate with a potential guest who only spoke English. We have been getting pretty good at understanding Spanish, but we still have lots of trouble with pronunciation!

We then continued on to another beach town (Santa Catalina) where we could do more surfing. Mitchell broke our long board and was convinced that he could find someone who could repair surf boards in the town. After walking all over town (carrying a 9 ft longboard) he returned exhausted and disillusioned that we would ever find someone that could repair fiberglass surfboards, in fact someone suggested maybe we needed a new one (ours is a little old/rough looking haha). We camped at a hostel that was under construction and Roo once again was on the hunt to eat all the construction scraps/glue/lard (remember our post from the San Pedro area of Mexico). So far, we have managed to prevent her from eating anything too bad, but she keeps us on our toes!

After some time at the beach we needed groceries and to do laundry. Fortunately, we were able to accomplish both while camping at a Terpel gas station near Santiago. If you are doing a road trip (or even cycling) through Panama we recommend camping and doing laundry at the larger gas stations, especially the Terpel’s in Panama. They are typically extremely clean, have inexpensive, self-serve, coin operated laundry, and allow free camping! When camped here we noticed that Roo had worms (don’t ask us how we noticed this, the only thing we will reveal is that a worm ended up in our bed… super gross!). This is likely self-induced from her extremely varied diet of ground scraps that even the street dogs typically avoid. We immediately took her to a fantastic vet in Santiago who gave her an anti-parasitical treatment that got rid of the worms right away.

We then decided that we would drive out to Playa Venao for some additional surfing. Little did we know but we would spend the most time here out of any destinations so far on our trip. We highly recommend Playa Venao and the Venao Cove Hostel for any overlanders who are looking to camp and surf. We did some much-needed additional waterproofing of our camper here (rainy season had officially started) and did lots of surfing and slackline practice. We ended up staying approximately two weeks in this area prior to heading closer to Panama City area to prepare for our flight back to Calgary and store our vehicle.

As we were planning on storing our vehicle in Panama while we returned to Calgary for a month for several weddings and birthdays we needed to extend our vehicle temporary import permit as the Panamanian import permit is only for 30 days. This required us to stop in the town of Chitre to buy more vehicle insurance, and find an extremely inconspicuous “aduana” (customs) office near the town of Divisa. Once we actually found the office, the process was fairly straightforward and we would recommend doing a TIP extension here, over the office in Panama City any day! Many people think that there is only the aduana in Panama City and David, but that is not the case. After getting all of these logistical items sorted we headed to Valle de Anton to do some hiking!

At this point we had approximately 1.5 weeks before our flight back to Calgary and we decided that we would like to see the Caribbean side of Panama. We drove through Panama City (bought Roo a dog crate for flying home at the Discovery Center – highly recommend – it was like Costco but even more things!) and then drove past Colón to a campsite near the town of Portobelo. Although the campsite we stayed at was spectacular, we would not really recommend this area as passing through certain areas of Colón was quite sketchy and not an experience we would likely repeat. We stayed one night here prior to returning to Panama City where we started out preparations to return to Calgary. While in Panama City we stayed at (and camped at prior to storing our truck) Hostel Amador Familiar. From here we were able to do some exploring of the nearby Panama Canal and check out the Amador Causeway.

In order to return to Calgary we had to store our vehicle at a bonded storage facility, we selected a place called Transbal and it was located in Chilibre (a town in-between Panama City and Colón). You would think that storing your vehicle should be fairly straightforward, but the process required visiting three different locations (two in Panama City, one in Chilibre). We had to follow this process in order to be able to leave the country with our vehicle still in the country. In addition to sorting out vehicle paperwork and storage we also had to obtain an exit visa for Roo (required visiting a vet and the official customs and immigration office in Panama). We also had some last-minute flight stress as the maximum temperature we were allowed to fly with Roo was 29.5 degrees Celsius and the typical temperature when we were flying out was 31 degrees Celsius. Fortunately, the day that we flew out was cooler due to rain and we squeaked by with a temperature of only 29.0 degrees Celsius… Needless to say, we were extremely excited to be finished this process and finally on the flight back to Canada! While we have loved our road life adventures we were looking forward to seeing family and friends and having consistent access to bathrooms, hot showers, laundry and wifi!