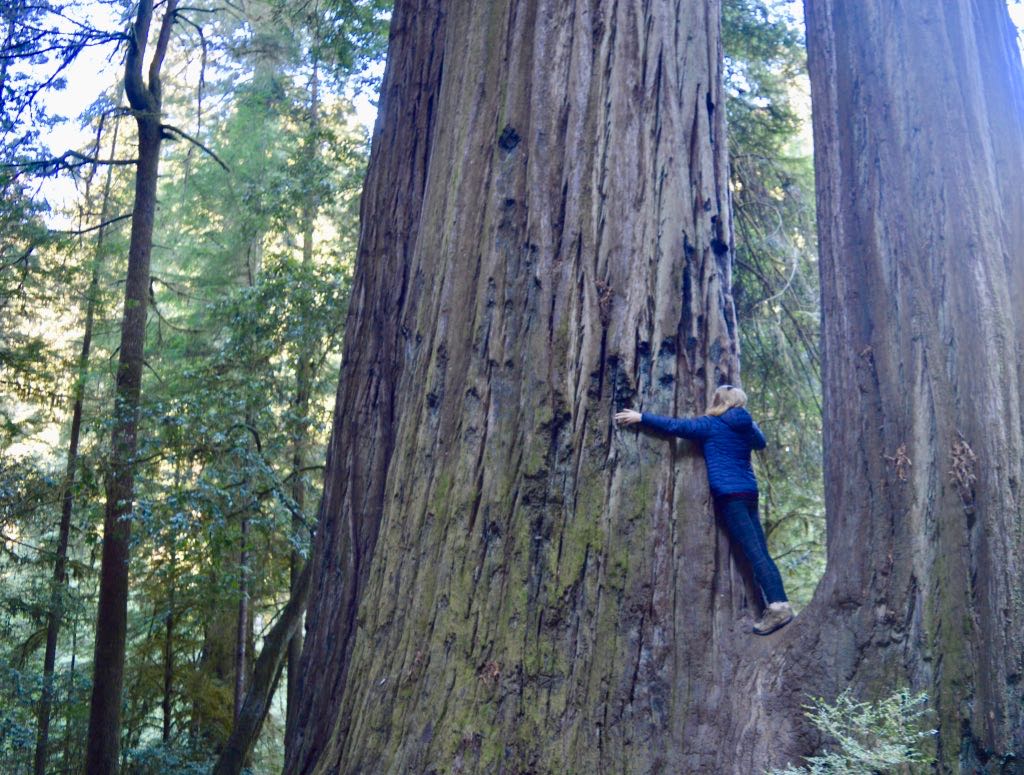 We started our time in California along the northern coast enroute to the redwood forests. The first section of redwoods we went through was the Jedediah Smith Redwoods State Park. Being relatively new to the redwoods (Brenna had been before, but a long time ago, Mitchell is a newbie) our first drive through the groves was surreal and had all of us (Roo included) craning our necks out the windows to try to look up at the giant trees. Coastal redwoods are taller than any other living thing and can live for over 2,000 years! Many of the trees we drove by were between 400 and 600 years old!

At a previous campsite we had met a couple from Germany who had just driven through the redwoods and had given us a free campsite recommendation (Sand Camp). We set out to find this campsite as free sites are few and far between along the coast. Upon arrival at the site (after approximately 1 hr of driving twisting turning roads among giant trees) we determined that this free site was “too accessible” and basically a “parking lot”. We favour sites where Roo can roam around! This led to us exploring a 4×4 track near a town in the area and “discovering” our first campsite which we then added to iOverlander. Based on a cursory inspection of our downloaded area map (thanks Maps.me) we determined that there was an offshoot on this 4×4 track that looked like it could be a campsite near a creek. The only challenge was getting there on a track that was likely intended for dirt bikes and ATV’s. Long story short, we made it no worse for wear and ended up finding a beautiful, isolated campsite located right next to a creek. Roo got to be a wild off leash dog (her favourite thing to do) and fortunately didn’t encounter any of the local wildlife (there seems to be a lot of skunks in Cali, both the hippie and black and white striped varieties).

After extricating ourselves from our campsite and driving through a few more Redwood groves (we recommend Howard Hill Road) we stopped for lunch in Crescent City. Despite grey, cloudy weather and uninspiring architecture (a tidal wave destroyed the old Crescent City in the 60’s and it was rebuilt according to strictly utilitarian principles) we found a great place for lunch with a patio overlooking the ocean. Roo was also allowed, and found an excellent place on the patio to spy on nearby diners and hunt for dropped food. We found another great campsite (paid, but not pricey compared to typical coastal Cali camping prices) at the Humboldt County Fairgrounds. This campground was $12/night and included showers! Most established campgrounds in this area were closer to $25/night. The showers weren’t the cleanest, but for the price and hot water with no time limit we can’t complain. The campsite was also home to several cats which provided excellent doggy television for Roo.

We would have loved to visit the Humboldt County Fairgrounds during the fair, you could completely picture the quintessential fairground experience even with it being deserted. Unfortunately, we missed the fair by a few months! The closest town to the fairgrounds is Ferndale, and it offered its own unique charm. One of the best things about our trip has been the flexibility to spontaneously visit places we have never heard of. Ferndale was a lovely surprise! It had many well-preserved Victorian storefronts and homes that are also known as “Butterfat Palaces” due to their construction happening when considerable wealth was generated from the dairy industry.

After Ferndale we continued to explore the redwoods and drove the Avenue of the Giants. As a typical redwood viewing experience we tried to go through one of the drive through trees only to discover that Toby the Tundra was not even close to fitting through. This wasn’t that disappointing as most of these drive through trees seemed to be tourist traps, although we totally we have done if Toby fit – can’t pass up a good photo op!

After leaving the Redwoods we took a detour back towards the coast and a town called Shelter Cove. The drive to Shelter Cove had many twists and turns in addition to hills; this didn’t seem to slow down the local drivers at all. Including one with a trailer that looked like it was swinging around turns. Our destination in Shelter Cove was Black Sand Beach, our brakes were smoking by the time we made it to the cove, indicating it was time to give Toby a much-needed break! We’re not quite sure if the drive down to the cove was worth it as most places in the village were closed due to it being off-season and we also lost the sun as we got closer to the ocean. We hung around just long enough to cool off Toby’s breaks, explore the beach and recover to make the drive back inland.

Once back off the coast the sun came out and we camped near a town called Willits. Brenna was able to catch up on some work at a local coffee shop and Mitchell and Roo toured the town, successfully finding a dog friendly used book store. In case it wasn’t obvious already, everything gets bonus points in our book when it’s dog friendly!

Up next… Sonoma and San Francisco!