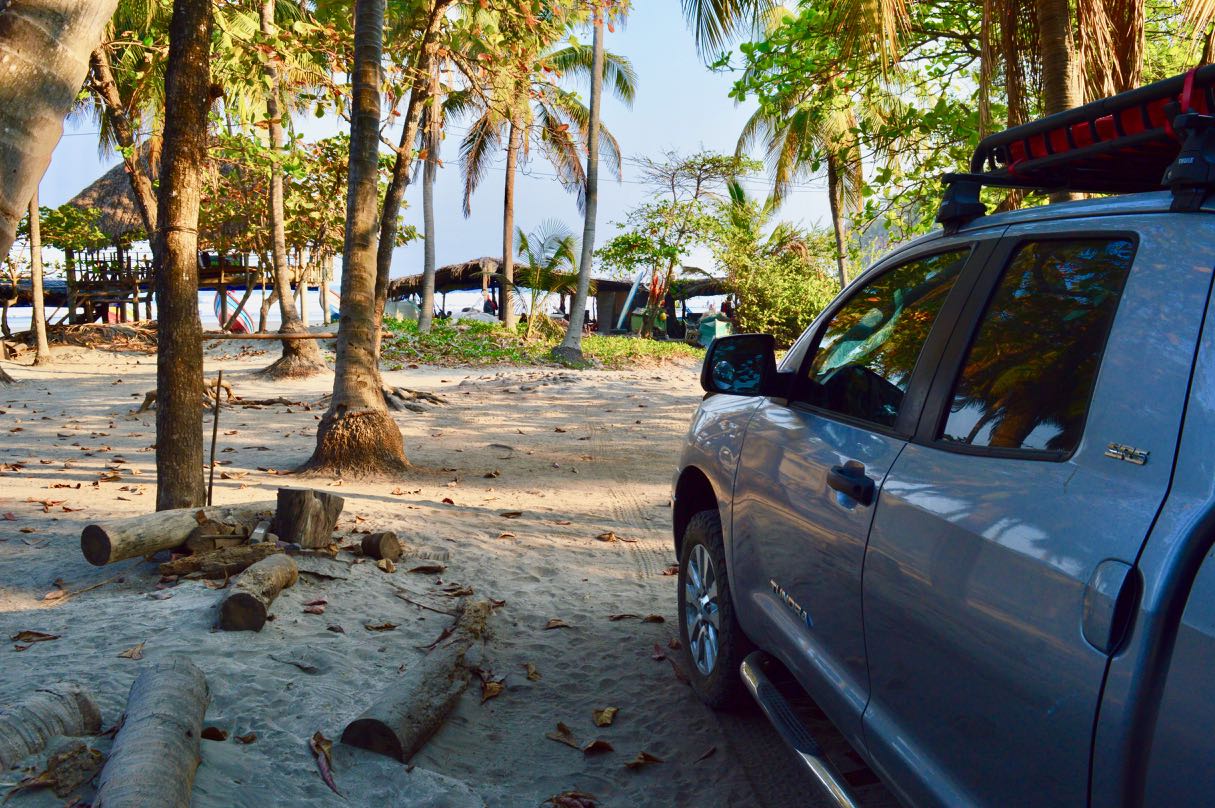 El Salvador was one of the most surprising (in a good way) destinations on our trip so far. Prior to visiting we knew very little about El Salvador and we were concerned about some of the negative stories presented by North American media (gang violence, etc…). We had a fantastic time in El Salvador and didn’t feel unsafe in any of the places we visited. Our trip took us across the entire country to bustling cities, beautiful beaches, and spectacular mountains and lakes. As when traveling anywhere, it is important to do research and take basic safety measures (watch your belongings, don’t drive at night etc.).

After a painfully slow border crossing from Guatemala (it was only slow exiting Guatemala, the El Salvadorian side was quick) we arrived in the town of Ahuachapan (don’t ask us how to pronounce this…). Initially we looked for a campsite in the town, however after getting lost in one of the town suburbs we determined that we would just camp at an auto-hotel as it was getting late (this is also referred to as a love-hotel…they rent rooms by the hour). We stayed far away from the mattress and leather couch in the hotel room and slept in our truck while using the bathroom in the hotel room.

After our lovely night at the love hotel (in all fairness this was a good place to spend the night), we headed to Lago de Coatepeque with a brief detour enroute through Santa Ana. Santa Ana is a large city with numerous amenities allowing us to stock up on groceries and water. However, after spending some time stuck in traffic and trying to navigate the tight streets and parking lots we were ready for a swim in the lake. Our first stop at the lake was at a fantastic restaurant called El Faro Del Lago. The Sopa de Mariscos (seafood soup) and the view of the lake were amazing. We camped at a Rancho in the area and all of us (especially the dog) enjoyed swimming in the lake and the cooler weather.

After some time at the “muy tranquillo” lake we started to feel the itch to surf again. This led us to the town of El Sunzal. Our first hostel/campsite choice must have been completely destroyed by a past hurricane as the road that supposedly would lead us there took us to the beach and then dead ended. This required some creative maneuvering to get us turned around (Mitchell drives, Brenna directs, Roo distracts) but eventually we made it back into town and camped at Surfers Inn, a hostel in El Sunzal. This was a great place to camp as we were positioned directly underneath several mango trees (how does unlimited mangos falling from the sky sound?). We did a bit of surfing at Playa Sunzal and Playa El Tunco which was nearby, but the surf was mediocre and crowded. Brenna got slapped in the face by a wave (not the ocean floor, just a really powerful wave) and ended up with a black eye. Yes, a black eye from a wave! We met several other travelers at Surfers Inn including a Scottish couple who are travelling Central America on bikes with a giant papier-mâché Donald Trump head interviewing refugees about immigration. Check out their blog at www.thebrinkonline.org. One of our favourite parts of traveling continues to be everyone you meet along the way!

After our less than ideal surf experience in Playa Sunzal we relocated to a campsite near Playa Los Flores. This was an amazing spot right in front of a beautiful beach with a great (and not busy) beginners surf break. We spent close to one week here and significantly improved our surfing. Roo unfortunately had some trouble with the local dog gangs in the area and was forced to retreat to her truck several times when she ventured into the wrong territory. We camped at a spot called Rancho Alicia which we highly recommend, although if you have a two-wheel drive vehicle you should bring recovery gear with you due to a loose sand beach crossing. Another group of travellers got stuck in the sand the day that we were leaving the campsite.

Our journal for El Salvador would not to be complete without mentioning Pupusa’s, which are incredibly delicious. Pupusa’s are thick cornmeal flatbread that is stuffed with one or more of the following ingredients: cheese (usually a viscous cheese called quesillo that is very common in certain countries), chicharróns (pork rinds), squash, refried beans or chicken. You could find pupusa stands everywhere and they were often priced well under a dollar meaning you could get a few pupusa’s and have a super tasty meal for only a few bucks!

We likely would have spent more time in El Salvador but we were meeting Brenna’s family in southern Nicaragua and had a couple destinations that we wanted to check out in the north so we had to move on! We got some great directions from the owner of the Rancho Alicia campsite and ended up crossing from El Salvador through Honduras’s to Nicaragua in one day!