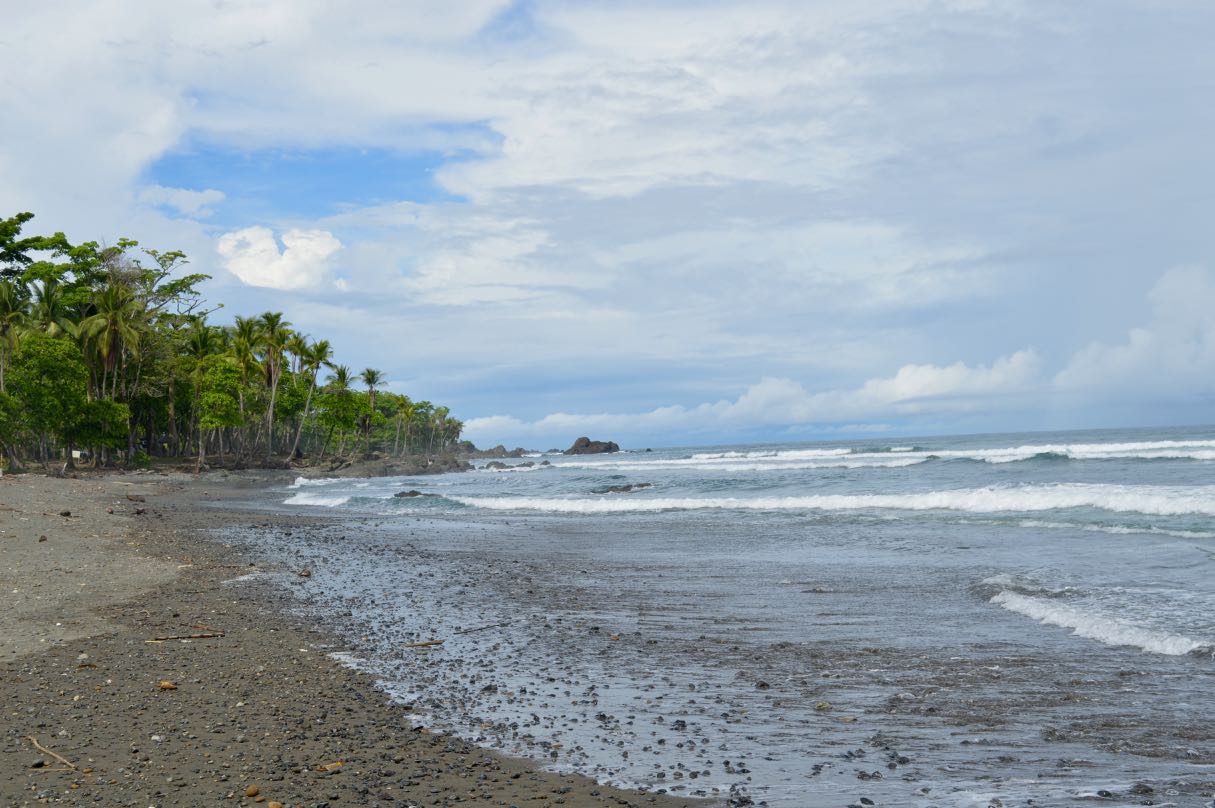 We exited Nicaragua and entered Costa Rica through the town of Penas Blancas. This was one of our smoother border crossings, although we did have some problems when the Costa Rican “cuarentena” (animal importation and quarantine office) was closed for lunch and then upon return stated that our vet documents for Roo were expired. This was technically correct, we had been using the same vet paperwork since the USA and all previous countries had been fine with it. Luckily, we were able to convince the officials to let us proceed into Costa Rica and see one of the nearby vets to update the paperwork. At the time it sounded like we would have trouble exiting with Roo because we didn’t get an official entry stamp, however at the exit no one cared or asked for any documentation. One thing we have learnt in Central America, especially with border crossings is answers and procedures can vary lots based on whose working and how they are feeling at that moment!

From the border town we travelled towards the coast and ended up at a beautiful hostel/campsite with a pool that we had to ourselves! You could also hear howler monkeys nearby! This was a great place to relax and was perfect until we woke up to no wifi, no cell service, on the one day Brenna had a 9 am reporting deadline. This required an early morning adventure towards Liberia (the closet major centre) until we were able to pick up cell service. There are significant challenges with working remotely in Central America where power outages/service dead zones are common and extended. Once Brenna was able to sort out work items (it was conducted by the side of the road in Costa Rica) we continued to Tamarindo.

Playa Tamarindo is extremely developed and is a common destination for Canadians with several Westjet and Air Canada flights going directly into the nearby airport in Liberia. This was a change from what we had gotten used to in Nicaragua, however we did find some delicious waffles and a milkshakes which was a big change from our typical diet of rice, beans, eggs, fresh fruits, giant avocados, carrots and “platanos” (plantains). We camped at a hostel in Tamarindo and tried to do some surfing however the crowds and windy conditions deterred us and we moved on after two nights. It was also very HOT!

After our time in Tamarindo we decided that we would head inland and check out some of the rainforests and experience some cooler weather. We started our trip towards Monteverde, an area famous for its cloud forest, and stopped along the way at the “finca” (farm) of Fernando and Vera. They were some of the kindest hosts we have met on this trip and gave us a tour of their property, and brought over tea and a snack one evening! Their property was very beautiful with both a view of the ocean and the bonus of cooler mountain weather. We were almost tempted to buy a section of their land that they want to sell (if anyone wants to buy land in Costa Rica we can get you in touch with them!). Roo enjoyed hanging out with their cows and swimming in the cow  water troughs; she’s now adept at honing in on any water source so she can cool off.

After a few days we continued on to Monteverde. We had determined that the typical hikes in Monteverde were overpriced and not dog friendly so we were intending on just passing through but we ended up finding a different trail through the cloud forest that was both free and dog friendly. The hike starts from the Cerro Amigo Mountain and required a little bit of extreme 4×4 to reach it. Typically, the access trail is only used by ATV’s but the weather was just dry enough that we were able to proceed most of the way to the summit in Toby. From here you can hike through the cloud forest and get the same experience as Monteverde without the entrance fee and ban on dogs. After the hike we ventured into the town of Santa Elena and explored a giant fiscus tree. Mitchell climbed the tree while Roo and Brenna flushed out an armadillo which Roo thought was some sort of very strange dog.

The camping options near Monteverde were limited so we continued on to Lago Arenal. If you are planning on driving this road be aware of the weather conditions as the conditions can get almost impassible during rainy season due to mudslides and washouts. We eventually made it and ended up camping at a hot spring water park resort. This was likely a mistake as we were unable to bring Roo (who is a crucial member of the team) into the actually park area. Sometimes it is can be trick juggling activities and the dog! In this case she was given the important duty of guarding Toby the Truck but she could still see us in the hot springs and was extremely disappointed about being banned from entering. We moved to the nearby town where we camped at a family’s house and got to do some hiking, swim in free hot springs, and use the nearby rope swim! This was a much more economical and dog friendly option.

After Lago Arenal we continued to San José and camped just outside of the city. At this point we were overdue for an oil change and were experiencing difficulties finding full synthetic oil with the correct grade for Toby. We ended up having to visit a Toyota dealership where we were treated like celebrities (they don’t have many Tundra’s in Central America). They also refused to believe us and sell us the grade of oil we needed until we showed them the owner’s manual for the Tundra. In hindsight we would recommend waiting on any maintenance until you reach Panama where numerous different varieties of oil are readily available and significantly cheaper!

From San Jose we decided we would return to the pacific coast for some more surfing. We drove through Jaco and camped at Playa Esterillo’s. We met up with several of our friends who we had met in El Salvador here and camped for several nights with them enjoying the beach and surfing. Mitchell and one of his surf buddies got caught in a rip tide here and ended up getting carried out past the point before they were eventually able to make it back in. It was a good reminder that the ocean deserves tremendous respect.

The beaches in this area of Costa Rica are all mostly available for free camping however we recommend that you lock up all your valuables overnight. When wild (free) camping in Central Amerca we typically lock up everything at night, in this one case we left bathing suits out to dry and half of Brenna’s swimsuit was stolen during the night by someone who snuck up to our truck at 3 AM. Roo ended up saving the other half of the bathing suit by waking up releasing some very scary barks – both Brenna and I were proud dog parents. A dog is honestly the best burglar alarm/ security you can have when camping in Central America! After stopping and camping at several other beaches along the coast we drove out around Golfo Dulce. The ocean is spectacular here and Roo loved the lack of waves in the Osa Peninsula. She would wake up at 6 AM every morning and take herself out for an ocean swim.

Next we drove to the other side of the golf to the town of Pavones which (for the surfers) has one of the longest lefts in the world (check out Robby Naish surfing it on a SUP). We camped on the beach but after having someone tell us that there was an armed robbery there a month ago we decided one night was enough and ended up moving to camp at a hostel in town. This is a beautiful town and is an excellent vacation destination (with the exception of the rough access road with tiny bridges). At this point we were ready to proceed into Panama and make it to Panama City to catch our flight home for several of our friends’ weddings in Summer 2019.