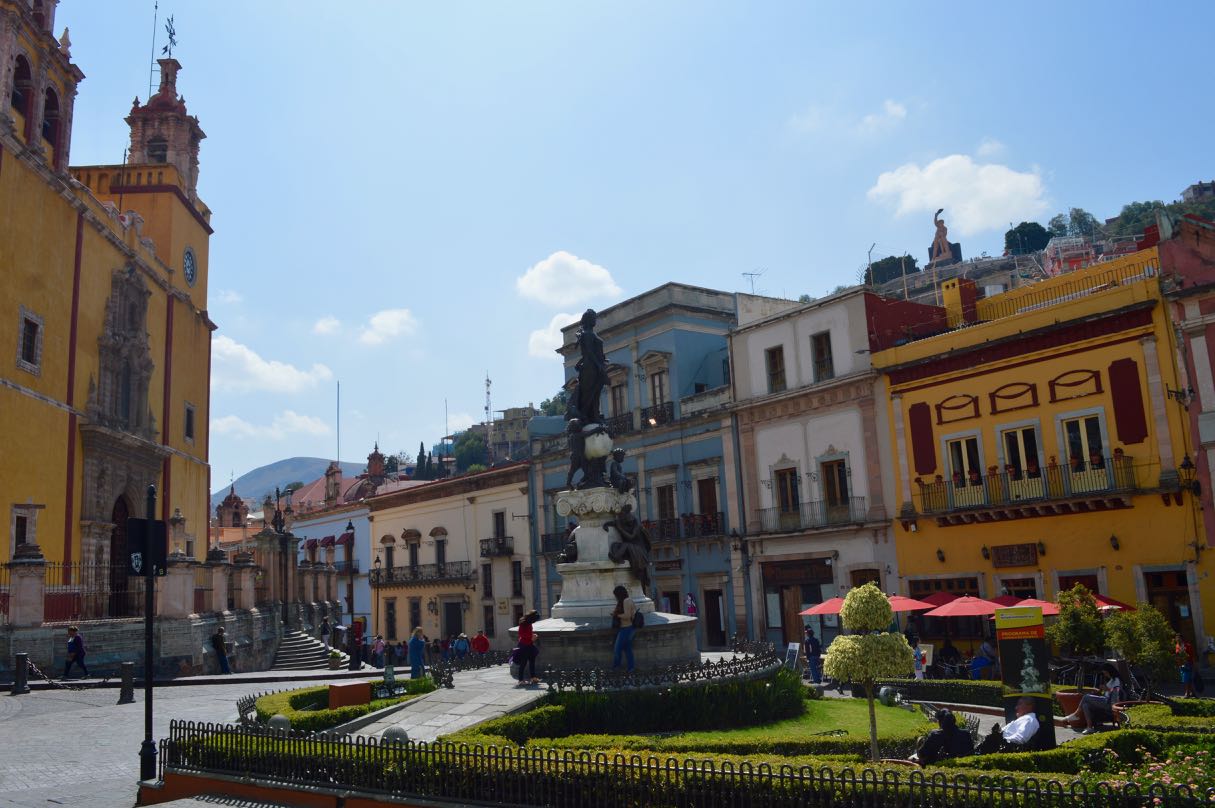 After our time in La Cruz we headed inland towards Guadalajara. This city was the most industrialized and developed area we experienced in Mexico. We camped at a parking lot in the city (which was extremely full of vehicles – but it did have bathrooms – yay!) and toured around the downtown and historic cultural areas of Guadalajara. The vibe of Guadalajara was very similar to large cities in Canada and the US and we ate at several trendy restaurants and tried to dress up so we didn’t look like we were camping in a parking lot! While we have had some amazing camping spots on this trip, sometimes we end up in the less scenic place for location convenience. This parking lot was secure and perfectly located for touring Guadalajara!

There seemed to be a huge wedding dress market in Guadalajara which we happened across in the downtown area. Brenna briefly considering looking for a wedding dress but the issue was complicated by determining a way to ship the dress back home or store it in the truck… #roadlife problems? For those of you who don’t know, we got engaged after we already started planning this trip, so for the time being any sort of wedding plan has taken a back seat to our current adventure!

After two nights of parking lot camping we decided that we needed a refresh (and some showers). We left Guadalajara and continued to Tonola where we had heard there was a huge non-touristy market on Sunday. We really have no space to purchase anything but Brenna really enjoys checking out all markets.  On our way to Tonola we stopped briefly in Tlaquepaque – and explored the historic center and checked out some of the local shops, Tlaquepaque has a neat art scene and there was lots to browse!

Given we were on the hunt for showers and still wanted to be close to the market which was happening the following day we decided to stay at a hotel. We splurged on a hotel with AC and we were lucky it also had a big parking lot for Toby! At times finding secure parking for Toby can be challenging in cities.

The market did not disappoint and took up multiple city blocks, it literally appeared overnight and it was HUGE.  The spectacular deals at this market made Brenna want to acquire all the crafts and artwork  and resell them in Canada. Or maybe buy a house in Mexico and furnish it with items from the market? If you are looking for a good deal on pretty much anything (handcrafts, pottery, metalwork, art, household goods, etc…) make your way to Tonola on a Sunday morning.

After our market day in Tonola we determined we were ready to experience some more of Mexico’s vibrant culture so we headed to Guanajuato which is considered (or at least considers itself) the cultural capital of Mexico. We were stopped briefly on the way outside the city of Leon by a Police officer who was very serious and demanded to see our “drugas y armas”. Eventually we convinced him we were just here to see Guanajuato and had not even the slightest interest in drugs or guns and he let us pass.  Guanajuato is an old mining town crisscrossed with tunnels and historic buildings that were constructed from the mine’s profits. We camped at a spot overlooking the town which not only had an amazing view you also got to hear the music of Mexico floating across the valley (this consists of random music, dogs barking, and chickens). While, this may sound like a disturbance it really only added to the surreal experience of this spot. It truly felt like we adventured somewhere completely new and foreign.

The town of Guanajuato is spectacular and hard to describe. We highly recommend anyone travelling to Mexico to visit. It is full of cultural buildings including several churches, a university, and theatre. We met several other overlanders at our campsite and we had the opportunity to tour a FourWheel pop-up truck camper, we eyed this setup when we first started looking for our overland rig. These campers are awesome and provide significantly more interior room than our set-up. This camper has definitely made our future camper goals list!

It was now time to head to one of our most discussed (and planned for) destinations of the trip, the Monarch butterfly preserves in the state of Michoacán. This is a series of small pine forests that are the destination for almost all of the earth’s monarch butterflies during their multigenerational migrations. Unfortunately, the state of Michoacán has been a in a state of conflict between several vigilante groups and cartels. This has resulted in multiple travel advisories and a reputation for being unsafe. In our experience it seems that this reputation is undeserved (at least on the west side of the state where the butterflies are located). We drove from Guanajuato to a small town, Angangueo, which is near the El Rosario butterfly sanctuary and stayed at La Margatrita Hotel (we ended up staying at a hotel as there were few camping options in the area). This hotel was butterfly themed and everything was painted or colored pink (even the soap).

After our night in the hotel we hiked the butterfly sanctuary (unfortunately Roo had to stay in the car, although she still got to see lots of butterflies on the drive up to the reservation). This experience should be on any nature/animal/butterfly lovers bucket list. The millions of monarch butterflies form a living, flying carpet and cover everything in the forest (trees, the ground, puddles of water, tourists). When we were driving to the reservation we had to slow down and stop for clouds of butterflies covering the road. This was an unbelievable experience that we will remember for the rest of our lives.

After having experienced the butterflies, we drove over the mountains of Michoacán and into the state of Mexico. We had previously applied for, and received a tourist permit for driving in this state as due to population density and air quality limitations around Mexico City certain restrictions exist for driving. The tourist permit allows you to drive at any time and on any day for a 14-day period. Otherwise you would only be permitted to drive on select days at certain times that are dependent on your license plate number. Definitely do your research before driving near Mexico City, as the fines can be steep if you are driving during a time you aren’t supposed to be. Our first stop in the state of Mexico was El Ocotal State Park which was “muy tranquilo” and allowed us to camp overnight in a beautiful pine forest near a lake. This park reminded us many of the state parks we camped in in the USA.

We skirted around Mexico City (got stuck on several more toll roads which is basically inevitable around Mexico City – initially we tried to avoid all tolls and Google had us off-roading through an industrial park) and arrived at Teotihuacán near the Pyramids of the Sun and Moon. We camped at a site right next to the pyramids, and toured them early in the morning before the crowds showed up. These pyramids are magnificent and are another must see destination in Mexico. We also encountered several resident puppies and dogs at the pyramids which almost could have come along on our trip if we had space. We have encountered many strays that we would have loved to have adopted, however it was especially hard to see puppies.

At this point we were close to approaching our planned amount of time in Mexico (three months) and we still had lots to see and experience! We made the call to continue heading south again and make our way to Guatemala before we had to buy more insurance for our truck (we had initially bought three months of insurance)! Our route towards the Guatemalan border will be covered in the next post!