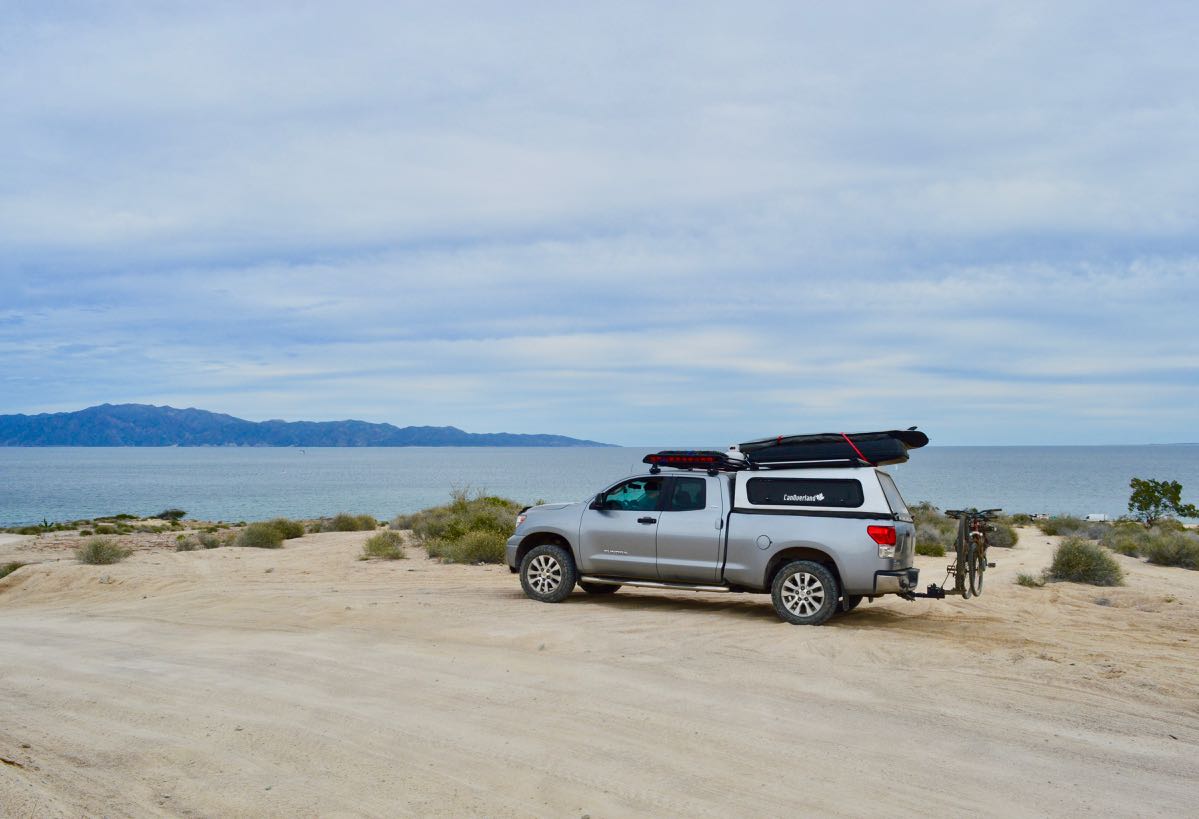 We stopped first at Playa Conejo which is an amazing beach accessed by a rather rough (yet scenic) road. There were a large number of long-term campers here for the surf which at the time was a little too gnarly for us, but we were able to wax our surf board and let Roo tear up the sand dunes in the area.

On the hunt for a more beginner wave we continued on to Pescadero Surf Camp in the town of El Pescadero. We got to test out our skills on a nice point break at Cerritos beach and were able to spend the Christmas holidays with a great group of people staying at the camp. We spent Christmas Eve sharing food and music from our home countries which included: The Netherlands, Czech Republic, France, The United States and of course – Canada. We learned that the classic Christmas tune “Grandma Got Run Over By A Reindeer” isn’t as well known outside of Canada and the US… We planned on staying two days at Pescadero Surf Camp, however as the owner Jamie predicted, we ended up staying over a week. Not only was there great people at the camp, it had a nice pool, and decent Wi-Fi which made it handy for catching up on work. Roo also found a Mexican boyfriend (dog) and they were both extremely sad when they had to break up so we could continue on our trip. We would definitely recommend El Pescadero Surf Camp!

Although we had a hard time leaving the surf camp it was time for us to continue our journey so once again we started driving south. We stayed one night in Cabo San Lucas where Roo recovered from her heartbreak and found some other great dog friends. Cabo San Lucas was crazy and filled to overflowing with tourists which quickly made us want to get back to the more remote parts of Baja. We walked around the town and marina and then moved on. From Cabo San Lucas we continued our way around the point and stopped in San Jose Del Cabo which was also extremely busy, but had a nice historic downtown square. We were initially planning on camping at the beach in San Jose Del Cabo which felt safe and had washrooms and WiFi, but it soon turned into party central (Toby was vibrating from the pumped up base from the car next to us) so we drove up a road near the Holiday Inn – a recommended camp spot from other overlanders and camped there. That was a good place to spend a quiet night and we returned to the beach the next day after the party had ended.

When we were in El Pescadero we heard from several other traveler’s that the Nine Palms beach was a nice place to camp but had no cell service or any restaurants or amenities nearby. After filling up on gas, using the beach WiFi, and getting groceries, we set out to find Nine Palms. The road was initially extreme (thanks Google). We met another group of overlanders who had to turn back due to the road conditions but we persevered and were able to make it until the point that the road was completely barricaded (intentionally). Road barricades appear to just be the more aggressive Mexican version of a detour sign. We have encountered multiple barricades made of concrete, dirt, palm trees, etc… Some of these barricades have even been in the middle of the city. Luckily this was at a point that we were able to cut inland and do a quick detour (on a much nicer road) to make it to Nine Palms. Note to others traveling to Nine Palms, despite what Google tells you, initially it is possible to take a more inland (smoother and faster) route from San Jose Del Cabo to Nine Palms.

Nine Palms is pretty reliant on the South Swell and when we were there unfortunately no surf was happening, but it was a great place to camp and we met several other semi-permanent campers who had travelled down for the winter months.

Not too far from Nine Palms is Cabo Plumo where not only is there more great camping but you can also snorkel from the beach! We forgot to bring our snorkel gear and decided to pick up two sets of snorkel masks at the Walmart in Cabo, let’s just say we’re still breaking them in.

We continued north around the peninsula in search of a place with showers. We stopped at a campground in the town of Los Barriles for New Year’s Eve and went to a nearby bar which had live reggae music. They really know how to party in Mexico as the celebrations continued way past midnight until 6 AM in the morning. Needless to say we did not make it to midnight, we’ve been told Baja midnight is 9 PM and we have been embracing that. It is hard to stay up to late when you basically live outside and it gets dark early.

After Los Barriles we continue to La Ventana and found a free beach camping spot which was unfortunately ruined by constant, unceasing wind. We should have expected this as this area is known as one of the best places in the world to kite or wind surf. For much of the East Cape we battled wind and let’s just say cooking and living outside is no fun when everything is blowing away.

After La Ventana we continued north to Balandra Beach which (although busy) was beautiful. We camped at a nearby beach Playa Tecolote and got to test out some of our recovery gear as several locals and some other traveler’s ended up getting stuck nearby. This is an awesome beach camping spot! 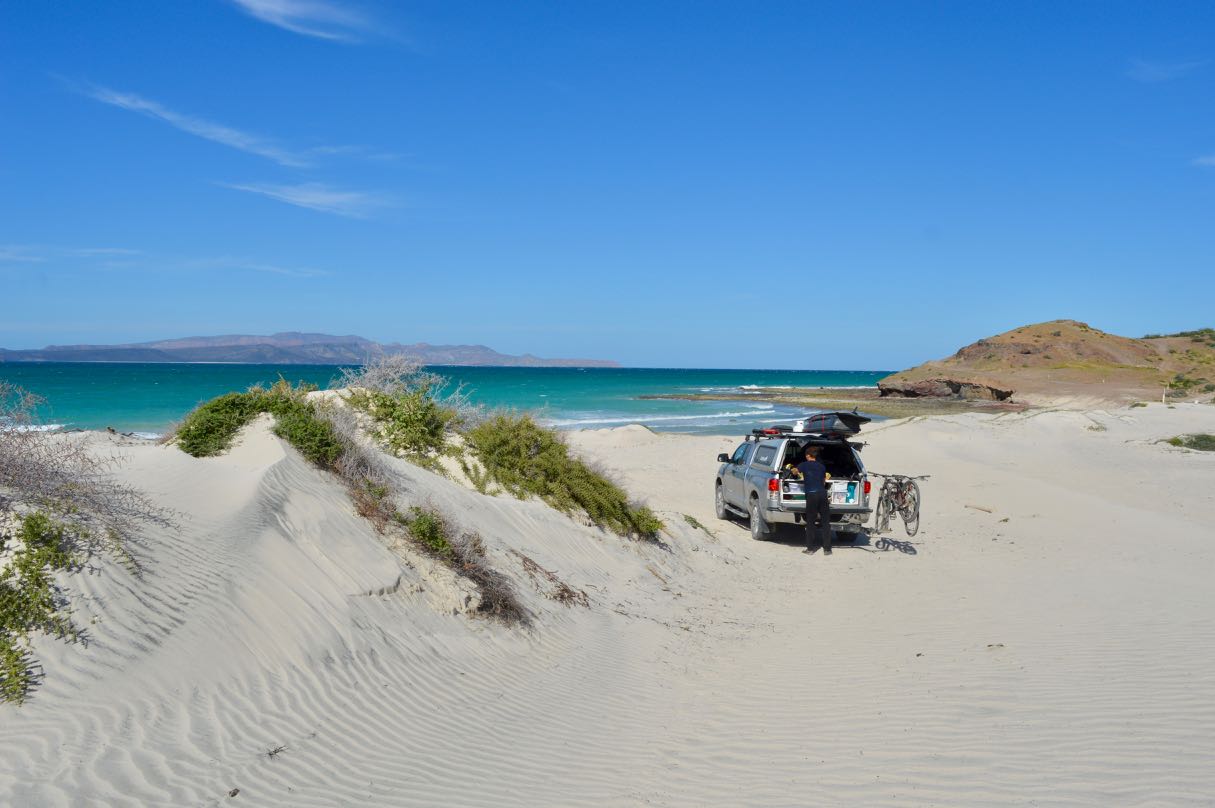 Playa Tecolote – looking towards the ocean.

Brenna had signed up for Spanish lessons in La Paz so we drove into the town and stayed at a campground/Airbnb that let us park on their property. If you are looking for a place to stay, Matty and Sari are lovely and have a home right on the water! They have a few spaces listed on Airbnb and are excellent hosts. We arrived on King’s Day (A big celebration in Mexico) and they generously invited us to join in on the festivities. There was also Karaoke. Our Spanish Karaoke is even worse than our English Karaoke. We spent a week in La Paz and really liked the city and the nearby area. Brenna enjoyed her Spanish lessons at El Nopal Spanish school, however she still has lots to learn and lots of practicing to do!  We had the chance to swim with Whale Sharks which was an amazing experience. They were junior whale sharks and were “only” between 5-7 meters long! It was a surreal experience being able to swim beside them. Roo also got to explore the water via paddle board, and she is quite keen on it now.

After our week in La Paz ended we spent one more day at the beautiful Tecolote beach before taking the ferry to the mainland! Our final days in Baja were relaxing and spent on one of the most beautiful beaches we have found on our trip so far. While we loved Baja after nearly a month and a half we were ready to take on Mainland Mexico!