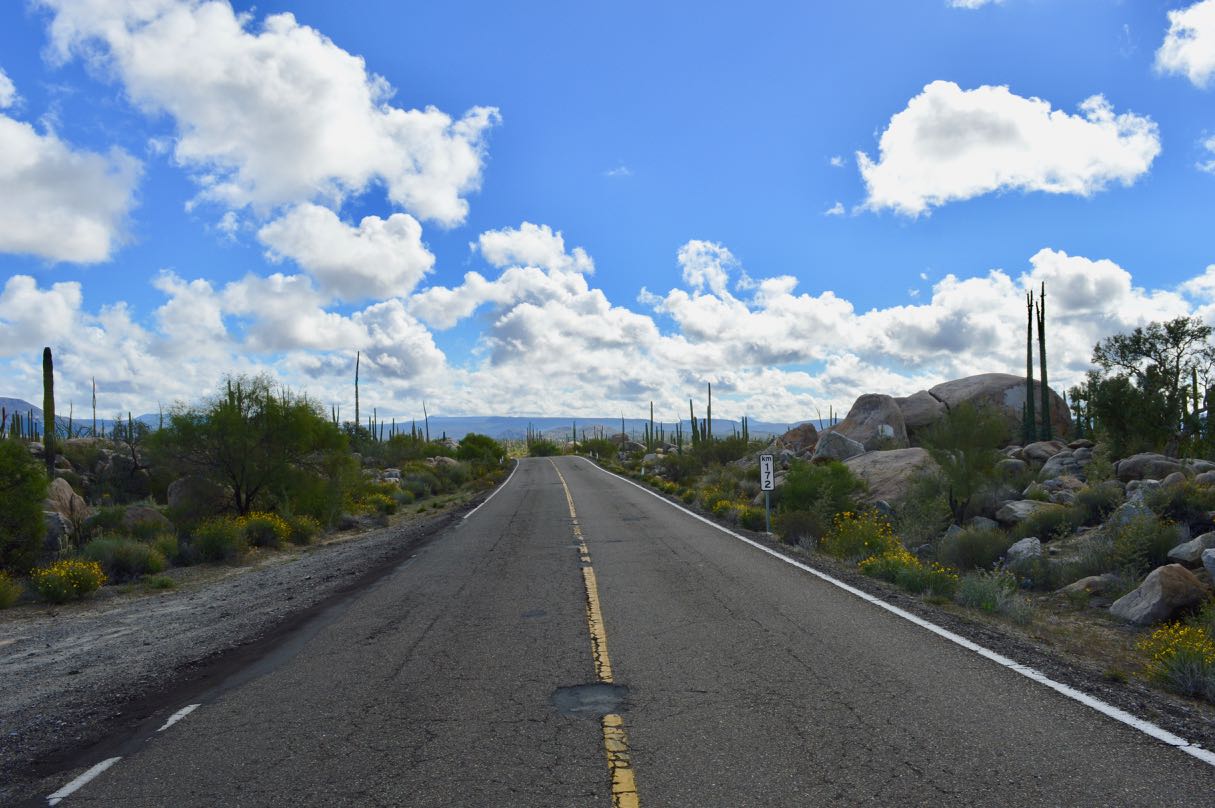 After crossing the border in Tecate (check out our detailed border crossing post!) we drove through Valle de Guadalupe, one of the main wine regions in Mexico. This is a beautiful drive among large vineyards with some amazing houses and views. We headed into Ensenada where we explored the town, almost got stuck in our first tiny Mexican street of the trip, and camped on our first Mexican beach!

We stayed a few days in Ensenada and ended up getting a Mexican phone plan (only $300 pesos for 5G of data, unlimited texts and calls to Canada + the US – way better than any Canadian plan). We also made friends with some other travellers doing the same trip (@SouthBoundandOut) who we encountered several more times in Baja and hopefully more during the rest of our travels! The beach campground we were at had hot salt water showers, which were interesting as you felt really clean after showering until you started to dry off and feel sticky due to the salt. It rained overnight in Ensenada and it was a good test of our pop-up camper water proofing. Overall it passed the test! We were fortunate there was a brief break from the rain while we packed up, as putting everything away when its damp is the worst!  After settling into the Mexican routine (muy tranquillo) we continued south as we were due to meet Brenna’s parents in Loreto in a few days.

We passed our first Military check point just outside of Ensenada. These are common throughout Baja and Mexico in general. They were friendly and simply asked us where we were from and where we were going. We didn’t even need to get out the vehicle. We drove to El Rosario in a serious rainstorm which flooded the streets and resulted in us staying in our second hotel of the trip. This turned out to be a good decision as we ended up in a great room in the cute town of El Rosario for only $500 pesos per night (it was totally worth it!). We ate at several of the restaurants in the town (can’t beat Mexican food prices). El Rosario is a popular spot as for many years it has served as a check-point in the famous Baja 1000 off road race.

Being on a timeline we were unable to extend our stay in El Rosario so we continued south towards Loreto. The cactus forest (part of the largest bio preserve in Mexico) was spectacular! The landscape was totally unique and breathtaking.

Another interesting fact for anyone driving through Mexico is that the drivers of large trucks are typically very helpful when you need to pass. They will pull over and signal to indicate when it is clear to pass, which is a huge help on the single lane, twisting highways in Mexico. Apparently, there have been laws passed against this practice as it can understandably create confusion if they are actually turning left, however it still seems to be quite common.

Our next campsite was in the town of Guerrero Negro. Home of an amazing $1 Fish Taco. We are on a mission to eat as many tacos as possible, and so far have never been disappointed! The Mexican street tacos are muy rico (very delicious)! We drove through the town and explored several salt flats before stopping at the Ojo de Liebre restaurant where we camped and made some new good friends (@theGreenNative). You could stay overnight behind the restaurant if you ate dinner there. The restaurant food was great and the owner of the restaurant was amazingly friendly and gave us recommendations on where to visit and had us sign his guest book. If you are ever in the area looking for a good place to camp and/or eat this is it!

While in Guerrero Negro we saw two overland outfitted Land Cruisers pull through town. They had a decal on the side and we looked up their Instagram – (@ExpeditionMarooned). We ended up running into them on the highway heading South and pulled over to meet. In Baja we met many wonderful people and often ran into them in multiple locations as there is really only one main highway headed south. Hopefully we’ll meet again on the road!