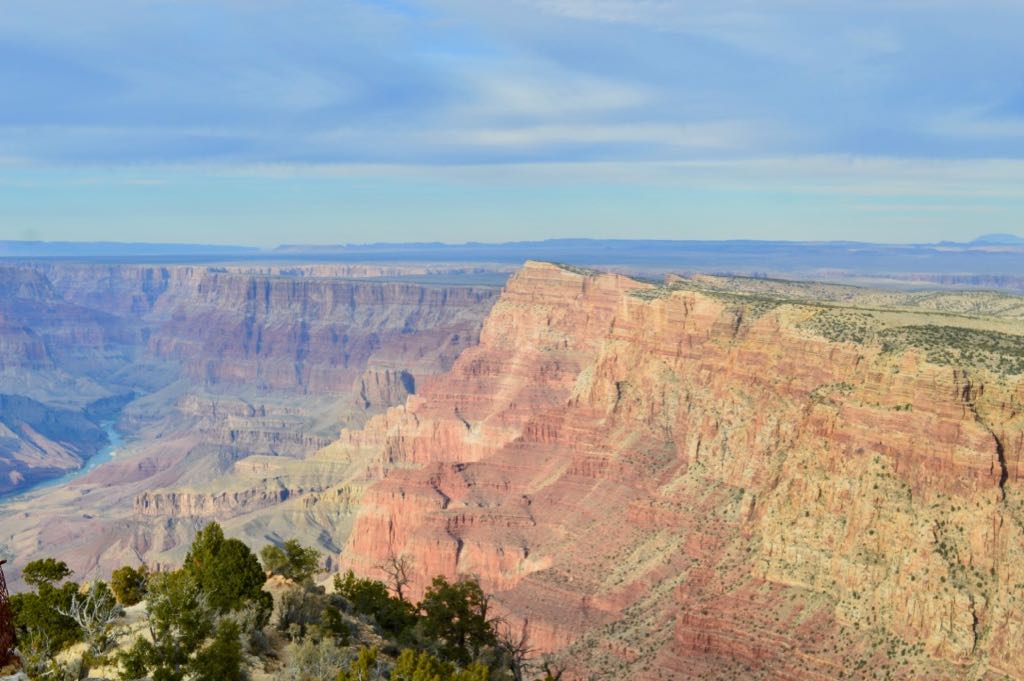 After leaving Monument Valley we continued on to Page, Arizona as we had seen numerous amazing photos of Antelope Canyon, Horseshoe Canyon, and “The Wave”. When we arrived in Page we got BBQ lunch at Big John’s Texas BBQ. As Albertan’s we like to think we know our beef and the brisket at Big John’s was amazing. In Page we camped at Lone Rock Beach Campground. We were camped right on the beach until we realized that the all of the outhouses on the beach were locked (there were 5 of them, all locked, maybe because it was off season?). After having indulged in BBQ we determined that bathrooms were a must (bathroom’s aren’t always mandatory but beaches don’t have much privacy – see photo below) so we decided to relocate away from the main beach area into the forest where unlocked bathrooms were located.   Roo immediately found (and chased) several resident coyotes who later voiced their displeasure at having to leave their nice forest spot.

In Page we realized that we were not the only people who thought that Antelope Canyon, Horseshoe Canyon, and “The Wave” were cool spots to see. As it was also close to American thanksgiving all of these places were packed with tourists and both Antelope Canyon and “The Wave” required a Navajo guide and permits to see. At this point we cut our losses and decided to see Horseshoe Canyon and the Beehive (or as the nice lady at the visitor center told us “The Wave 2.0”). We first hiked “The Wave 2.0” which was amazing and seemed to be completely unknown.

Horseshoe Canyon, although spectacular, was full of tourists who all wanted to pose with Roo (she is now an international celebrity). We quickly hiked to viewpoint after parking in a huge vehicle line up on the road and snapped a couple quick photos.

After Page we continued on to the south side of the Grand Canyon. We found camping in a national forest approximately 10 minutes away from the canyon and hiked the canyon rim. Unfortunately the main hike that descends into the canyon is not dog friendly (as per usual with national parks) so we had to stick above the canyon rim. The Grand Canyon was, in one word, grand (Mitchell’s favorite joke to make while walking along the rim).

From the Grand Canyon we started driving south towards Flagstaff and we stopped at Walnut Canyon National Monument. Walnut Canyon was where the Sinagua (people without water) lived in from about 1100 to 1250 CE. They lived in hollowed out dwellings along the canyon walls and must have been seriously fit to climb between houses.

When we arrived in Flagstaff we toured the historic downtown which soon will be completely dog friendly (a nice change from all the national parks). All of the stores were having black Friday sales, and the vast majority of them welcomed Roo with treats and pats. She was even given a Doggie Cigar (made out of dried sausage)!

After Flagstaff we continued into Sedona which was amazing (also warm, so extra amazing). We camped on a nearby forest road with all the other Thanksgiving campers. Several sites seemed to be semi-permanently occupied which was understandable given the amazing views. Sedona was one of our favourite towns as it was positioned between spectacular rock formations and had many different hikes, a great library with free wifi, and all of the amenities we needed.

After Sedona we stopped in Phoenix briefly to visit relatives and then continued on towards San Diego and our second border crossing of the trip!